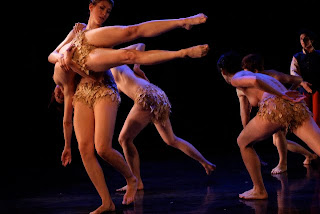 says the “prince” as he lands, more or less in a heap, on the stage.

And then again, “Uugghh!”

Each entrance brings titters, giggles and outright laughs from the audience in the theater at Dance New Amsterdam. But not from the six half naked young women who continue craning their necks and torsos and cooing and squawking in swan or goose like warbles. In their meandering line behind which this somewhat startled individual male interloper arrives now and later, each time as if having fallen down a hole. Storme Sundberg, Jennifer Lafferty, Kira Blazek, Hope Davis, 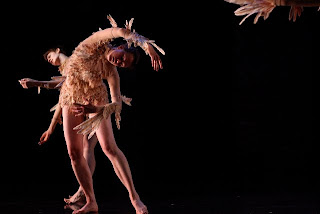 Emily Stone and Ursula Eagly remain unruffled, regal; one might say serene if not for the frank and focused intensity of their demeanor.

Above: Hope Davis and Ursula Eagly twist and squawk

The women have assembled after entering in a procession marked by repeated backward arabesque leg extensions; a procession that recalls, twists and tweaks that of the 32 ballerinas in the “Kingdom of the Shades,” scene from the ballet La Bayadere. Bedecked in gold tinged costumes embellished with feathers, they have preened open

and plucked off their long sleeved bodices with their teeth revealing the shapeliest breathing collection of breasts, torsos and backs I think I have ever seen.


Above: Ursula Eagly and Hope Davis in opening sequence

Gaining his feet, the primary color clad courtier (Adam H. Weinert) makes his way in balletic lunges and leg extensions from his fallen entrance towards the front of stage where he locks eyes with the feathered femme fatale who has led the procession (Sundberg). Facing downstage toward the audience, she lights up with the electricity of their connection, and the two find themselves carried into an exhilarating extended flying duet by the other five bird-women. The swoops and twists of the swirling lifts culminate as the three supporting the swain execute a deft fly-under between the bridging pair holding high his swan, 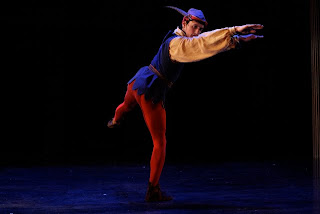 then vanish all into the wing pursued by audience applause.

Right: Adam H. Weinert with his prince on

Had Christopher Williams’ world premiere of “Hen’s Teeth” ended here, I feel certain that we would have all gone home happy. But the choreographer/costumer/ringmaster and, in this case, troubadour harp player’s vision and ambition demands almost as much of his audience as it does of his artistic collaborators. I find it necessary to slow down my theatrical rate of expectation to that of his more measured medieval sense of time.

As if to reinforce this, the work has been set to a moody score by composer and conductor Gregory Spears, who triples as the electric organ player in the 10 piece ensemble who perform, live and visible, in the large offstage area to the right of the two fluted columns that delimit the stage space in front of the audience. 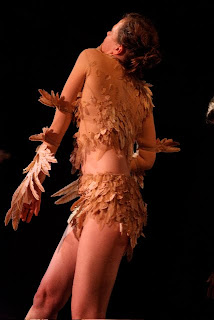 That score takes the form of a Requiem Mass sung in Breton, Middle French and Latin by the likes of half the cast of Anonymous 4 (Ruth Cunningham and Jacqueline Horner-Kwiatek) and 4 members of the acclaimed male a cappella vocal group Lionheart (Michael Wenger, John Olud, Lawrence Lipnik, and Kurt-Owen Richards.

Above: Ursula Eagly plucks off her top

Williams’ work requires patience. He do go on. The choreography from him that I have seen to date lives on the edge of wearing out its welcome, and in this concert it often steps over the line, challenging, perhaps taxing, the audience to remain engaged. Yet I appreciate the time and space he gives us to think and associate under the inspiration of his just–as-provocative imagery. The ephemeral nature of youth, youthful beauty and prowess, of love, of all life lies at the heart of this meditative pageant.

As he has done with past shows, Williams has included Requiem’s lyric in the program. The prelude intimates narrative. The translation reads:

A very long time ago
When hens had teeth…

Listen, if you will,
And you will hear a pretty tale.

As realized by the exquisite ensemble, the music bespeaks the mastery and majesty of human heart and mind as it rises to the constant occasion of loss.

If the tale of the lovers carries the sensation of flight in sensual beauty and hope, the rejoinder comes in the form three crones, powerfully embodied by Joan Arnold, Grazia Della Terza , and Alison Granucci. These heavily costumed apparitions, with their bald pates and their beard-like masks that, like an Islamic niqab, leave only the eyes uncovered, dance as if through mist and mud or clinch their entire bodies around the stage’s columns, their long crooked green fingernails seeming to claw the flesh of fluted steel. 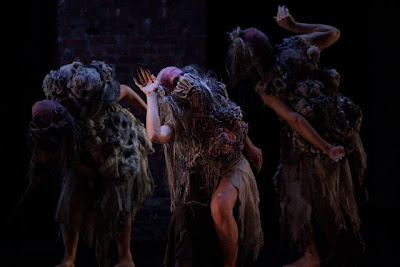 Joan Arnold, Alison Granucci, and Grazia Della Terza as the crones based on the ancient Greek Graeae

The denouement of these contending tableaux comes in an extended counterpoint, as first three of the “swans” return, their torsos now swaddled in rope-mesh tunics. From behind their line, the swain re-enters with his “uugghh” and thud, as love inevitably falls to earth. The finale finds the crones displacing this quartet. They enter encased in stiff reliquary-like sarcophagi of various lengths, each of which has a different devotional door that they one at a time swing open exposing a human and vulnerable face, a breast, a forearm.

As striking, vivid and fastidiously fashioned images such as the reliquaries can be – reminiscent in their communicative quality of the Scout-encasing ham in the film version of To Kill a Mockingbird -- Williams’ creativity with costuming can sometimes get in his way. The crones’ masking and headpieces limit movement and expressive possibilities, as do the tunics on Sundberg, Eagly, and Lafferty. (The program lists Andy Jordan as the designer of the evening's costuming, with additional elements by Williams and Carol Binion.)

I admire Williams’ thematic mash-ups even when they don’t quite cohere cogently. I see this as less the case with “Hen’s Teeth”, than I did with the program’s opening work-in-progress tentatively titled “Gobbledygook.” Here the stark naked and brilliantly choreographed Weinert meets a black painted plywood wall at the back of one side of the stage space before he is met with the bare chested, hakama pants wearing Eikazu Nakamura. 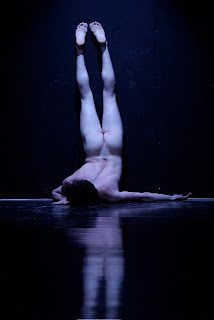 Nakamura sidles in near the back of the stage at the audience’s right while the blue-lit Weinert, starting prone at our feet, probes gravity and his wall like caterpillar seeking a chrysalis hook. In their single stark moment of interaction the Japanese dancer helps his hapless partner find his sticking place by pinning him to the wall with a hand around the throat.

Above: Adam H. Weinert in "Gobbledygook." All photos by Paula Court

The two intensely introverted solo sequences that follow for Nakamura have the feel of esoteric ritual, the second adding an armor-like vest made of woven reeds over the hakama. 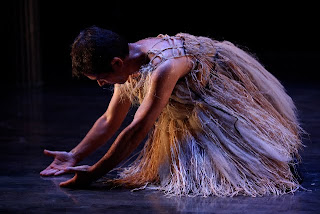 Only had you picked up press material, consulted DNA’s web site, or had the time and sense to ask the choreographer or one of the dancers post-show, would you be likely to know that the ritual incarnates an imaginary version of the Buddhist segaki rite that concerns itself with personal atonement and easing the suffering of the wandering (slithering?) dead.

You might further have discovered, perusing these same sources, that “Hen’s Teeth” incorporates imagery inspired by the mysterious flying women found in a Breton fairytale preserved by 19th century folklorist François-Marie Luzel, the Graeae, or three swan-like crones of ancient Greek myth who share only one eye and one tooth between them, and that associated with the display of holy relics in the middle ages. Who knew?

When does such elucidating information become t.m.i. (too much information)? I ask simply because Williams generous and admirable inclination to edify his audience can sometimes backfire to limit the literal minded. I, for one, enjoy not knowing until I want to know. I then enjoy using the tools that the creator has placed within easy reach, including himself. In the meantime, I have not been prevented from intuiting a reference to Matisse’s La Danse in the midst of the topless sextet, or the choreographer’s wicked way of tilting with Petipa’s Swan Lake imagery.

In the program credits, Williams can seem to be everywhere at once. But I find it intriguing that only the press notes for “Gobbledygook” mention him alongside the program-credited David Griffin as the source for the piece’s intricate electronic sound score. This artist belongs in the opera house, and I predict that it will only be a matter of time until he lands there. That seems the only place that his production values and vision can live in uncomfortable equilibrium with the support; artistic, technical, production and financial, that will allow them all to reasonably complement or at least successfully co-exist in creative competition.

If the creator’s obsession as a medievalist may initially obscure this path to the stage, his devotion to music and spectacle makes his breakthrough, for me, a matter of when and not if. Given his ability to render, he can, like the young Robert Wilson, devise collaborative operas of his own. His vast visual frame of reference, and his dexterity in presenting both male and female form, often startlingly yet insouciantly nude in ways that allow us to recover our endless fascination and sense of humor surrounding this mortal coil, point to a future on today’s big screen performance stage.

Jacqui Kerrod, on pedal harp and Elizabeth Weinfield on baroque viola performed admirably along with the rest of the music ensemble. The excellent lighting across the board can be credited to Amanda K. Ringer. DNA’s Artist in Residence program continues to impress.
Posted by DJ McDonald and his enemies at 7:59 PM 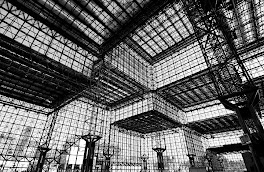